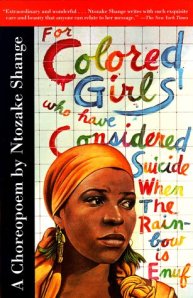 The question, the searching, the discovery: Whose little girl am I?

I can not remember how I came across For Colored Girls Who have Considered Suicide When the Rainbow is Enuf by Ntozake Shange.

I vaguely remember watching ACT-SO one  Saturday morning and marveling at young people rehearsing and preparing, a bevy of activity around dreaming.  And then the auditioning.

One young lady began a monologue that was so raw and real that I stopped right in my tracks: “One thing I don’t need is any more apologies/I got sorry greetin me at my front door/You can keep yours/I don’t know what to do wit ’em…”

The discovery of the title, the author and how I finally got my hands on a copy, I don’t recall. But once I found Ntozake Shange, her 1979 work became my wisdom book, scripture; the model and standard. It was unadulterated talk about womanhood and even more specifically Black womanhood. And there I was, setting out on my own woman-walk, afraid to express what I felt and even worse afraid to feel because being a nag, or having an attitude or simply crying had been done to death.

But when I found these words, this poetry, I was rest assured that not only was it okay to express the highs and lows; entanglements and escapes associated with this woman-walk, but the spirit demanded a purging for the journey that lay ahead. She did this for me and for countless others in her choreopoem, For Colored Girls who have considered Suicide When the Rainbow is Enuf. She offered a place to sing girlhood songs and cry and laugh and remember first-times and question perceptions and contemplate our bodies in bold, beautiful color.

Then I heard that Tyler Perry would bring my beloved Bible to the big screen.

All I could think was: “This is a woman’s trip. I need my things…”

I admire what Tyler Perry has accomplished, but I am not a fan. His work never moves me to deeper questioning and deeper understanding. It’s not designed with that purpose in mind. I get that. But to take on For Colored Girls…?

I was very skeptical and frankly— scared. How could he possibly capture the haunting, the magic and the beauty that is this woman-walk.

Then the first chord of Nina Simone’s, Four Women  called me to attention, chimed in my soul like calling, as it does anytime I hear it.

It is just the trailer.

But it was enough to have me eager for November 5th when the movie opens.  I just have to see how her words coupled with Perry’s interpretation lead souls back to themselves.

Because  For Colored Girls… always championed that you are yours and must embrace all that you are because the answer has always been to find god in yourself and love her fiercely.